Last December, Kayla, my young flute player, had All-Region Band tryouts. It may have been one of her hardest school moments so far in her 9 years of school.
Kayla loves the flute. Since day one in 6Th grade, when she tried out for the instrument of her choice, she wanted to play the flute. And she is pretty good at it too. The past few years, she has stayed at first to third chair. At the football games this year, she was front and center, when playing on the field. She really likes her band teachers and they really like her, pushing her to be better, everyday. Last year, she won the band award for the seventh grade.
A lot of pressure. The expectations are high. She is probably harder on herself, than anybody. That is what made that weekend so very hard.
It was a busy week. The Christmas season had started full swing. There was band concerts, parties, the middle school dance and right smack in the middle was the All-Region competition. YUCK! Kayla was stressed.
I can still remember dropping her off that morning at the school. "Mom, I'm nervous. I wish I had never won that award last year. Everyone expects a lot of me. The pressure is getting to me and I haven't had time to practice like I needed to."
The pressure got to her.
I picked her up, and she didn't think she did well. In her words, she got nervous and "spazzed out!" I encouraged her and we went to the church to decorate for her Christmas tea party being held the next day. While at the church, that evening, she started getting texts from friends saying "they made it!" and what chair and band they were in. The girls decorating with us, found out what they were and were excited. Then we found out Kayla's ranking.
2ND band, 2ND alternate.
In other words, she didn't make it unless two people didn't show. Not to mention that she didn't even make first band. It was OK at first. She was trying to look on the positive and stay upbeat. But that is so hard for anyone, especially a young girl, when all your friends are continuing to text you with their "better than you" scores. It is hard when you know some of the kids that made it, are not even the best in the band or don't even really care. It was just hard, period. But I thought she was going to be OK.
Until, I couldn't find her. Everyone helping me decorate had left and I realized I hadn't seen her in a while. I texted her. She had found herself a dark corner in the church and had cried and called her dad, band geek senior.
My little girl was in so much pain, and I was helpless. She was so angry at herself. She felt like she had let us all down. I did the only thing I could do; held her tight, let her cry, helped her find positives and showed her that life was not over. I then took her and bought some chips and dip from the Mexican restaurant and a chick flick. We would survive.
And we did. She bounced back, continued to encourage her friends and congratulate them and plugged along. She was choosing to stay positive. I was and still am very proud.
Fast forward to this weekend. I'm worried. It is All-Region. Kayla has to go, as an alternate and I was worried that it would drag up a lot of hurtful feelings. I was worried that she would have to practice all weekend and then not get to play. I was worried because that is what us moms do best, right?
Shouldn't have. Turns out she does get to play. I don't know the details, just that I have had to run her back and forth to practice. Evidently two seats "mysteriously" were empty. Kayla and her new friend from another school would get to play after all. When I asked her if it still bothered her about not making 1st band, she said, "No, I'm over it. In fact I like the music better for 2ND band anyway. I've had fun."
So there you have it, friends. We don't always see the bigger picture. I believe that this was a growing experience for my little girl. And although it hurt like crazy, it taught her a valuable lesson in how to deal with the failures that come our way. I totally believe we should always try to be our best, but sometimes our best may not be THE BEST by the world's standards. But it doesn't mean we've failed or that we can't appreciate the step we are on. Life is a journey of ups and downs. Sometimes the downs just make us appreciate what we have a little more.
Kayla,
Mommy loves you. I have been so proud of you. Seeing you smiling today and having fun playing the instrument you love, erased the memories of a hurtful weekend. I wish I had the maturity you have shown the past few months, when I was your age. You have a strength, that could only come from God. May He continue to use you, everyday, to be a display for His light. Especially, when the painful days come and then go. Keep the music going, baby doll. Always keep His song in your heart. 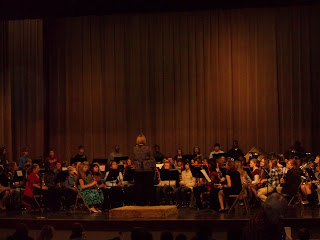 Kayla is in dark red sweater. 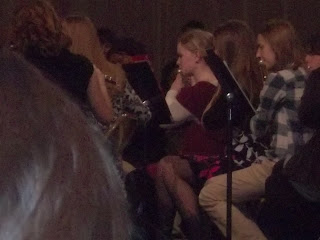 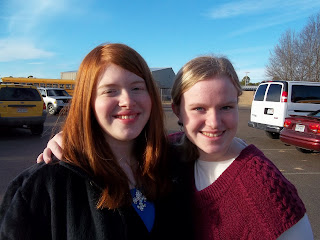 Kayla and friend after concert. (SMILING!)

GOD answers the desires of our heart with what is truly best for us in the end: "I like the music in 2nd band better!" No coincidence that GOD knew all along where she should be!
Blessings,
andrea

How wonderful....God is so good...he always works things out for our good! Your daughter sounds like a wonderful girl... we are going through some things with my son that are hard on Momma's heart. It is so hard to watch them make what you think are the wrong decisions.... being a Mom is hard!!! God knows what is best. Have a great weekend :)

Yay for Kayla. :) The Lord worked it all out for her to get to play. What a blessing!

Kayla,
Go ahead, grand-girl! Flout that flute! Enjoy! Looking forward to hear you "flout" some for us some time. Love you.

Congratulations to Kayla for making the All-Region Band! I was in band for ten years, all the way through college, and then I worked for almost three years with high school band students. The way a person handles their disappointments and keeps moving on, speaks far louder than any successes and awards. She is definitely a winner!! I am so glad she got to play in the all region concert!