They Made My Mommy Heart Plum Giddy!!! 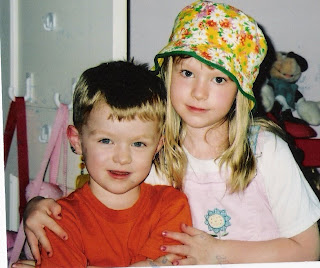 I am the blessed mom of two children. Kayla will be thirteen in a little over a month and Jordan will be 11 at the end of October. My kids are almost exactly two years apart in age. When they were little they were so close. Jordan thought Kayla hung the moon and Kay thought our little Jorboy was her personal "pet." Did I say pet? I really meant pal, buddy, friend...

Who am I kidding? I really did mean pet, for she trained him constantly to be like her and do what she did. She was the one who taught him how to climb out of his baby bed. She told him it was funny to hide in the clothing racks at stores and NOT answer mommy when I called their names. She told him constantly he had to do what she did. Which as preschoolers it meant they both teamed up against this poor mama and led me on a merry chase. At the time, I probably looked like I constantly wanted to pull my hair out, but as I look back, I end up smiling. They were so close...once upon a time.

They were so cute in the way they hugged on each other. I can still see them laying on top of each other giggling at their favorite cartoon. They looked adorable in their matching Easter and Christmas outfits. And then time became an enemy and they grew... they went their separate ways. Kayla went to older bossy sister city and Jor entered the "girl's are yucky" club and their relationship has all gone downhill since.

Oh, I know they still love each other. They still share some laughs. But I sometimes miss that closeness they had when very small. I pray everyday among the "stupid" name calling and the yelling and the bossiness, that I will catch just a glimpse of the pals of old. I see friends with their older college age kids and how those kids now enjoy hanging out together and can only hope...

And then it happened, a small glimmer of hope. I went to pick up Kayla from her mystery party Sat. night and was talking to her old 5th grade teacher, who just happens to now be one of Jordan's teachers. I was talking about Jordan, when all of a sudden Kayla pops in with "Jordan is really a good kid. You won't have any problems out of him." What? Did I hear right? "Stupid Boy" is no trouble after all?!!! And I have a witness!!!

Oh, it was enough to put a little joy in this mamma's heart after a long week. I was ready to just savor the moment knowing the next time might be when they graduate and leave the house...

But wait! Today, I come in and ask Kay if she would do one of Jordan's chores since he had a lot of homework and she had none. She did it without complaint. (I am beginning to wonder if an alien has invaded her body) HE even said "thanks." What is up with that?!!! Where are the two complaining, whining, insisting "it is not fair!" two kids I love and adore? (Not that I am complaining!!! Just worried they might both be coming down with the flu or something!)

But it gets better... Jordan has a test he has been studying for. He is really worried about it. I told him I would help after I finished what I was doing. When I went to look for him, he was in his sister's room (no yelling going on!) and Kayla was helping him study. I know my face went from pure shock to a cheesy looking smile. I had to hug them. I probably shouldn't have, for the moment ended after that, but I couldn't help myself.

My heart was plum giddy. (Sorry, I'm from the south. We say stuff like that.)

Oops... I hear "noise" from the other room. Sounds like a referee might be needed. Hmmm...well at least we know they are feeling alright!!! :)
Posted by Mich at 7:22 PM

elaine @ peace for the journey said...

My two older boys are close; they've always shared a room. Now they're away at separate colleges, but still the best of friends. They got together this weekend to do laundry. When they're home, they constantly pick at one another, but every now and then it looks like love!

My younger two are also very close; one boy, one girl. I hope they stay close as they grow older.

You're doing a good job mom.

Our children are all grown, but one...however during their teenage years they had an unbelievable bond and continue to, today. They loved each other when they did not like us. Yes, they had some squabbles, but they stuck together. I praise GOD for that to this day.
Blessings, andrea

PS: Did I mention we have a blended family with two adopted. It is amazing what miracles GOD can work.

Too often we find those precious hidden jewels in times like these when siblings really do show the love and caring we know is always there.

It's just buried in layers of other stuff and it comes out every once in awhile to let you see it and then fades back away.

That is so awesome! THis post has me hopeful. LOL
I see the love every once in a while, but then they realize they are being too nice and then the bickering starts. But those days that they get along are music to my ears.

I needed to see this, for my children treated each other in less than stellar and less than loving ways at their guitar lesson today. Had to let each know that neither one is "going back". They both are going to be in this family whether they like it or not.

Oh, all of those moments are so precious. And they really bring joy to mommy's heart! It's so sweet to see the evidence that they really do love each other, isn't it!

My cherubs are 21 months apart. I LOVE when they unabashedly (and unexpectedly) show such love to each other!

Eek....your talk of school and tests....we still have two weeks of summer left, but we have been finishing up their summer work packets due on the first day.

Just what a mother needs to see…a bit of encouragement. It is one of the most wonderful things about being a mother…to see our children loving each other.

Thanks for the sweet story.
♥Hope

Check them for Swine Flu.

Of course they love eachother!!! Remember us?!? I used to bug the snot out of you, but you wouldn't have traded me for the world...right? Right? SAY, "Right."

Love, love, love those moments!!! We have to remember those... when we have the 'other' moments ;).

There is not one thing in the world that I love more than to see my kids loving each other and being kind to each other. Like you said, "it makes a mommy's heart plum giddy." I thought what Andrea said was funny. That her kids seemed to love each other when they did not like them. That does seem to be true. Siblings love for each other seems to find a way of expression when they think they have to team up against something or someone. Too bad it has to be the parents sometimes. HAHA
A great way to remember those sweet times between your kids is blogging about it. That is wonderful!
Christy

Ahhhhhhhh, yes. I know EXACTLY what you mean! All those moms of little kids don't know what's about to hit them.

Some day they will appreciate each other. I look forward to that day. =0) But not too soon cuz I want to enjoy this age too....somehow. =0)