I think I've mentioned that Jordan is painting a bench. I really didn't realize what a big deal it was. He has just been telling me that he is painting a bench in art. OK?! I don't know what I thought he meant, but I found out the other day that it is a pretty big deal.

You see, his school has a new learning garden. The art teacher asked all the kids to draw a picture of nature. The pictures were voted on by a panel of judges. The best pictures were chosen. Those kids whose pictures were chosen, were asked to paint their picture on a bench that would go in the new garden. Jordan was one of the winners. I think there were maybe five benches altogether. Pretty cool, huh?
They had a dedication ceremony today, but it was at a time I couldn't go. So I contacted his teacher and she said I could come early and he could show me his masterpiece. He was really excited about me seeing his bench. He has been working hard on it, even staying some after school. To think, my son's drawing will now be a part of history at his school. 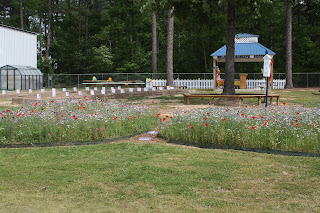 This is the new learning garden, where Jordan's bench will be put. 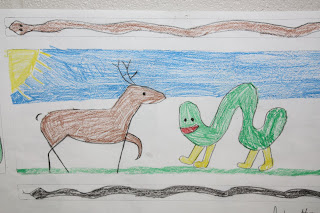 This is his picture that won. 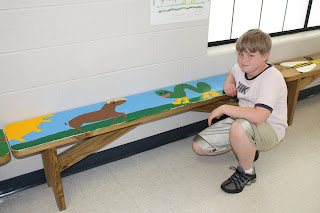 This is his painted bench.

I'm pretty proud of him.

On a side note, Jordan won his ballgame tonight. He actually got to play the whole game. He made three hits and scored one run. Way to go, Jorboy!

Kayla had her first recital and did a beautiful job. I am so proud of her! She has to dance in the opening number of the two recitals tomorrow too. We will be busy! I'll post pictures later.

Sis,
Give Jor a hug and this message --
Way-ta-go, Jor! Proud of you. Keep up the good work and your drawing. Congrats on the game and your hits, as well. We love you.
Poohpa

What a cool looking bench!

That is awesome that his bench will be at his school for so many to enjoy for so long!

I've thought about having my kids paint stepping stones to put in my yard somewhere, but have never gotten around to it...seeing that bench is getting me inspired to make it happen! :)

What a COOL thing to get to do...and it looks great!!!