"These shoes were made for dancing..."

Last Monday I spent almost three hours watching a dress rehearsal. Last night I watched a two hour program. This afternoon I spent another three hours in an auditorium chair and tonight I spent...well you get the picture. Why? Because of these shoes... 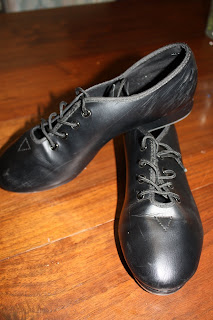 My daughter caught the dance bug about four years ago and has tapped along ever since. I am in awe of her and her ability to tap. Along with the ability to sing like her daddy, when I get to heaven, I would love to be able to "river dance" my way down those golden streets.
I didn't take many pictures during the program, because my friend who is a photographer sits down front at every show and takes pictures of all the girls. Last year she got some great ones of Kayla. So, I took a few, but the lighting is horrible so you will just have to wait until I see what she was able to get.
However, in the meantime, I thought I would travel down memory lane a bit, after all my little girl is growing up. Here is to four years of hard work, money, costumes, a few tears and lots of smiles. 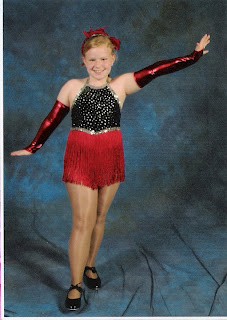 Kayla was in third grade. The story behind this picture is, I was out of town sitting with my very sick grandpa at the hospital and "Daddy" had to get Kayla ready for this picture. I heard about how "awesome" he was for weeks afterwards from all the other dance moms. He did pretty good, huh? 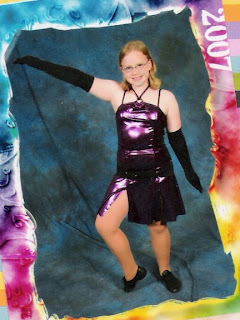 In fourth grade, there were no other girls her age dancing, so she was put with the older girls and thought she was big stuff! She did pretty good too! What I remember most though about this certain year was her chewing bubble gum during the recital. One of the teenagers had given her a piece of gum backstage. She was ballet dancing her way through the song, popping her gum along the way. I went back stage and fussed at her about the gum and almost made her cry. She was afraid she didn't do a good job, because the first thing I said to her was "WHERE DID YOU GET THAT GUM?" I regret that moment, because the truth was she was beautiful, gum and all.

Fifth grade was a hard year. We moved in the middle of the year. She was upset at leaving her dance teacher who she loved and a little uncertain of her dancing skills with the new teacher and the new class. There were many tears shed this year for different reasons. She wanted to quit so many times, but I wouldn't let her because of the commitment she had already made. (I would never MAKE her dance, but when she has a place in a recital piece, she needs to finish what she starts.) However, in the end it was a year of growth for her and she hung in there. She did a good job too. She just lost a lot of her confidence when we moved. But she didn't lose her love for dancing... and believe it or not, she wanted to dance again. 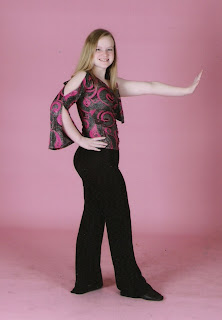 So here we are, finishing our fourth year. We have come along way. Kayla told me that this year she wasn't even nervous. She even smiled more while dancing along in the recital. She will never be the star of the show. (She could one day if her passion was dancing, but for now it's not.) I don't think she even wants to be the center of attention. She just loves to dance. I guess we will have to wait and see if she continues on this adventure we call dance, next year. 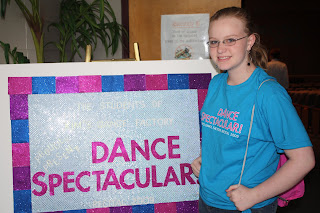 We are very proud of you, Kayla!

For Kayla,
If you weren't my only grand daughter, I'd still think you were "grand" because of who you are and your courage, and as auntie Am might say, your ginormous stick-to-itiveness. I look forward to seeing some recent photos of your recital.
We love you,
Poohpa

Yea for Kayla sticking with it! I'm sure that the recital was great! Can't wait to see the pics!

I heart that girl. Oh so much. And beautiful...oh my stars.

Oh these pictures are fabulous! It is amazing to see how much she has changed in only 4 yrs! Love it