Tomorrow is my anniversary. 16 years ago I married my best friend and soul mate. I was just thinking the other day, how I met and started dating Kevin in the Fall of 1989. I have spent almost half my life with this man. 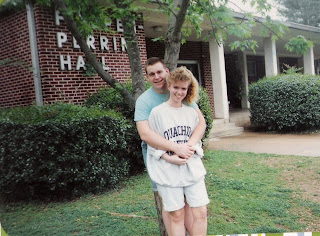 how sweet!!! Happy anniversary! I love you story and love the picture --- have a wonderfully romantic day!

Happy Anniversary, sweet OBU friends! Thanks for sharing your love story, Mich. I love hearing how people fell in love.

Has it really been 16 years since I wore the country blue curtain dress? Huh.

Sis,
As you know, tomorrow is very special! TRULY, IT IS YOUR 16TH, AND AS I HAVE ALREADY EXPRESSED IN AN EMAIL, I'M PROUD OF YOU BOTH FOR BEING WHO YOU ARE, TOGETHER IN GOD'S SERVICE.

OF COURSE, IT'S ALSO SPECIAL BECAUSE YOU CHOSE OUR ANNIVERSARY AS YOUR'S, TOO. YOU MAKE OUR 44TH ALL THE MORE SPECIAL!

Oh Happy 16th Anniversary! How wonderful! I love your testimony here...and my heart jumped as I was reading the part about you walking in and seeing him at the movie with Jody. God is so good to bring His plan about!

My hubs and I were friends first, too, which was the perfect foundation for our God-ordained relationship, too!

First off…Congratulations on 16 years of marriage!

It has been difficult to get computer time to read blogs, but finally this morning, while everyone is still sleeping, I get to have FUN!

Speaking of fun…this little story was quite fun. I love reading stories about how couples met. Your husband sounds so darling. Isn’t it wonderful to know you were made for each other? God surely has good plans.

But first…I have tagged you in the 6th folder, 6th photo challenge… Sixth Photo Challenge

Of course, if you do not feel up to doing it, I understand perfectly. So do it if you like, or not, if that suits you best.