Just so you know I actually did go to camp and not make the whole thing up, I thought I would share a few pictures. (Plus, my family reads my blog so they like to see the pictures.) The picture above is of the whole group that went, which is probably about 75% of our Wednesday night crowd. If you look real close you can see me (and my hubby) on the far right of the picture. 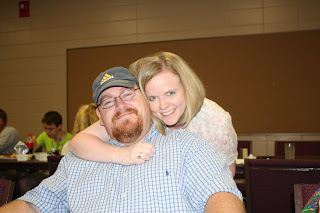 Here I am with who I think deserves the "Student Minister of the Year" award. We had a chartered bus and our small bus going there and back. My husband drove the small bus while everyone else got to sleep. (Remember we left at 4:30a.m.) Then we got to the camp and they had messed up our rooming assignments...between the camp staff having everything confused, our kids whining and the elevators being shut off (while us girls had to climb 4 flights of stairs with luggage) he kept his cool. I found out later that because of the out of routine early morning hour that we left, he had forgotten to take his blood pressure medicine that morning. All I can say to that is that God is good! 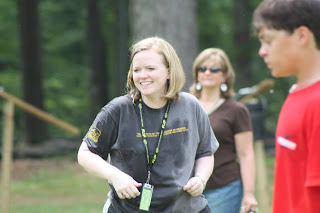 I told you I got wet. Two of my family group kids came and poured water on me. It actually made me feel good to realize that they had gotten to know me well enough to feel comfortable doing that. 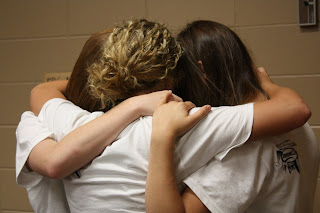 I took this picture the last night of camp. During church group time after the worship service, Thursday night, we had a unique prayer time. My hubby asked all the 7th-9th grade to sit in chairs in a circle and then he asked the senior high to go around the circle praying for each student as they went. It was beautiful. Some whispered prayers in a young friend's ear. Some hugged and whispered words of encouragement, while some just laid their hands on each one, sending a blessing their way. There were smiles, plenty of tears and lots of hugs. It was a very meaningful moment. When they were finished, he asked the senior high students to sit in the chairs and let the younger students have the honor to pray for their role models. I was blessed. Watching 50 kids praying for each other by name... words can't describe the spirit of that room. When it was all over, four friends huddled (above) in encouragement. I love this picture and all it stands for.

I will leave you with one last thought... it is from the lesson I had to teach on Wednesday.

"Discipleship is learning to live by dying. Followers of Christ are not called to deny themselves of something, but to deny themselves. God's will replaces their wills; life gets rearranged so that God is not only a priority, HE IS EVERYTHING!"

Have a great week!

Sis,
WOW! You did it again! T.E.A.R.S! And tell Kevin that I think he deserves the award, too! What a testimony and results of the week. We pray that that which your group experienced will be a constant in their return home. It could cause a revival to break forth, indeed!
You continue to bless me, girl!

We're "hanging on...hanging out" with your 3 nephews - Sunday went great...the boys met through VBS some new friends that had some good times with today, as well. A busy week coming up!

That picture of the girls praying together is precious.

"There were smiles, plenty of tears and lots of hugs."

Plenty of smiles and tears on this end, too. The "hugs" picture says it all. Ministry is wherever He plants you, and you guys are rockin'! Or maybe God is the one rockin'...through you guys! :)

I found you in the picture, before you told us where you were!!

And hooray for you and getting wet at rec time!! Way to step out of the comfort zone, sis!

And I'm so happy that God was working at camp this week. The picture of the girls praying is beautiful.

Any mother running off to work that early in the morning has my sympathy! That is a hard life...of course providing the pop tarts and cereal count!

Thanks for stopping by.

Thanks for these memories from your camp trip. They bring back precious memories for me.